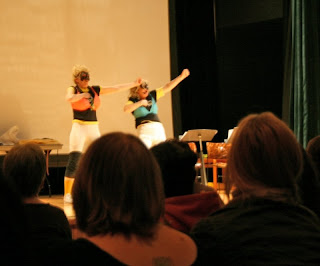 8 hours on the road and we finally arrive in PA and find a fantastic Italian restaurant (A Taste Of Italy) where Julia and I unwind and bed down for the night. Next day it’s off to State College and our much anticipated return to Penn State. We are met by a great tech crew of Tom, Greg and Matt who take us smoothly through our now seamless show…well, except for the ad libs. Susan of the Women’s Center shows up with dinner platters and smiles and we are all set to go for our show in Heritage Hall.
Julia and I performed to a SRO crowd in Heritage Hall at Penn State. Fabulous feminist audience and the show rocks. Can’t ask for more than that. Here is excerpts from our review.

FROM THE DAILY COLLEGIAN March 18, 2009-04-05
“Feminist performers wearing gorilla masks and wigs threw bananas and bread at a full house Thursday night. A slide show of the women in their masks at various locales around the world played as attendees filed in. The show opened with a routine announcement to turn off all cell phones that quickly became humorous, saying that the Guerrilla Girls would pause for hot flashes, menstrual cramps and contractions that are two minutes apart. When the show began, two women ran onto the stage, wearing bras and control tops over their clothing and dancing like King Kong. They then tore off the bras while making loud monkey sounds, eventually throwing the bananas at the audience. They introduced themselves as Child and Behn, giving a mini-biography for each woman and explaining why they wear the masks and use alternative names. During the performance, feminist topics were pulled out of a hat by the women and then discussed. They began with "memories," which involved the performers showing pictures of the Guerrilla Girls On Tour at places around the world and with people from around the world, including a doctored photograph of them drinking beer with the Pope. The women asked the audience members if they considered themselves feminists. Both men and women alike raised their hands, proving the women's point that feminists come in all shapes, sizes and genders. Next, the performers read letters they had received over the years. Some letters complimented them; others were threatening. One was a letter from a boy who apologized for a fellow student who threatened to kill them. The performance took a more serious note during a discussion on rape. There was no laughter from the audience as the women displayed images of a marriage scene, a little girl holding someone's hand and a man's hand on a woman's thigh, all with the words "this is not an invitation to rape me" stamped across them. However, the moment didn't last long, as the women then put on President Barack Obama and Vice-president Joe Biden masks and blazers and danced to "Saturday Night Fever," ending it with a kiss. They also provided statistics about Obama's achievements for women, such as recently signing an act that now protects women from pay discrimination. The women also graded Pennsylvania and gave the state an F on its "reproductive rights report card" because 78 percent of communities in the state have no abortion providers, they said. They also informed the audience that only seven states guarantee a woman's right to birth control; pharmaceutical employees in the other states are allowed to refuse a prescription because of religious beliefs, they said. The performance ended with a skit about a woman who wanted to produce a play, but the theater owner only produced white men's plays. Penn State's own Serenity Ireland played the female playwright. "They're hilarious. I love it," said Ireland (freshman-theatre). "I might be a Guerrilla Girl On Tour in the summer."

At Penn State there were crowds for days that stretched to the far corners of the ballroom. We gussied up our Guerrilla suits in an industrial kitchen while ambitious students put tupperwares of ziti in the fridge before the show. I thought about hanging out backstage the whole show and eating ziti, but then I remembered that only 12.6% of NYC theatre productions were written by women, so I combed my back hair and went onstage. I had a pretty big crush on the audience. They were cute and had good taste in entertainment, not to mention the fact that they were really into changing things round those parts. (and they gasped in a kind, concerned way when I tripped up the stage.) sweeties. We hurled bread
and bananas at them to their and our delight.. Bombs over Baghdad!

I had a fabulous time and hope to return soon!

Driving to Boston early Tuesday morning Julia and I go over the news. AIG bonus disaster and what’s going on with the US banking system. We try to figure out how to work that into future shows. We eventually resort to our old driving game of making up short musicals about impromptu topics….like the hotel we’ll be checking into soon. At Bridgewater State College we are greeting by a group of students assigned to help tech our performance and we are glad that most are theatre savvy techies. The tech goes smoothly and we pour ourselves into the corsets, girdles and bras we’ve added to the beginning of the show. The enthusiastic audience claps and cheers us on and we end on a high note. Now off to Pennsylvania!