Dramatists Guild Says ‘No’ to Women 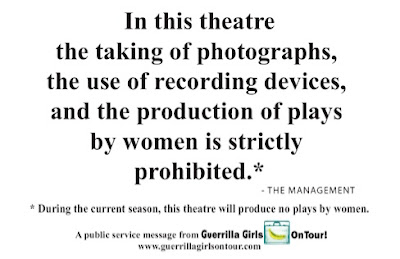 “While we have several small committees directly formed and overseen by members of the Council, there are no separate groups of members from the organization that have Council committee status. I hope you can appreciate that were we to make an exception in the case of the Women’s Initiative, we would have to do so for groups wishing to address other valid issues such as bias based on ethnicity, sexual orientation, age, etc. The Guild is a grouping of many different voices, and while we greatly appreciate the fine work you’re doing, we have to be sure to balance the needs and concerns of our entire membership.”

Posted by Guerrilla Girls On Tour at 1:01 PM 2 comments: