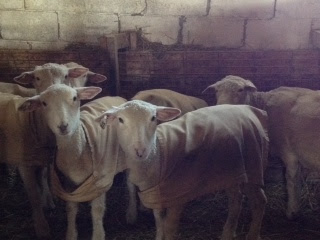 Sheep and kittens and feminists, Oh my! It is so exciting to find all these things in Mansfield, Pennsylvania.

“Feminist are Funny: the Mansfield University Edition” was a hit and it was great to feel the audience become energized by funny feminists. In fact, the audience took over the show during our new song “Our Words” as they roared “lesbian”, “vagina”, and “feminist” with such enthusiasm that I bet it could be heard clear across campus. Way to reclaim some female words, Mansfield University! 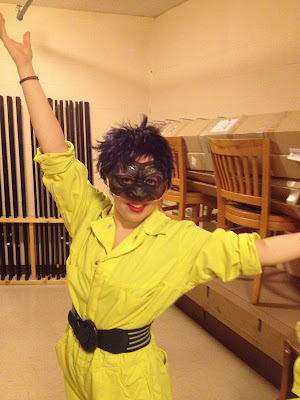 Isadora Duncan, backstage at Mansfield, U!

After the show it was great to talk to some of the women of Mansfield who fight for equality on campus and beyond. From the female editors of the newspaper to people who work with HAVEN and REACT helping to end violence against women we were glad to hear that fighting sexism is taking many different forms in Mansfield. Thanks, gals, for taking some of our posters with you!

And now for the Isadorable part of the visit... 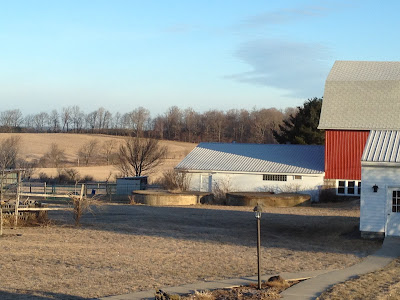 View from our rooms at the Arvgarden B and B

It was a joy to stay at the Arvgarden where we meet a barn full of sheep and cats. These sheep had spunk and will need it, for they will be giving birth to baby lambs in the weeks ahead (raised for their wool). 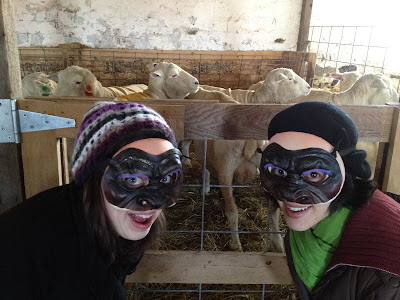 It was also great to talk with innkeepers Hilma and Keith about spinning yarn, weaving, and the local history of northern Pennsylvania. We even got to hear about Hilma’s great great grandmother who kept a detailed diary of her life, family, and farming. She reminded me of the importance of keeping a diary like this one for GGOT. 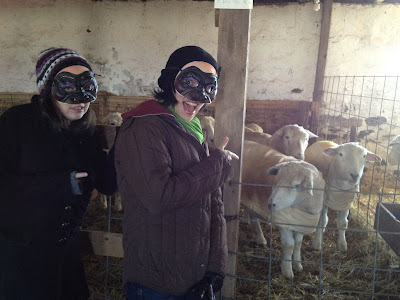 You think Guerrillas are crazy? Try a night in the Pennsylvania countryside with a flock of sheep and some feminists from Mansfield University...Those sheep will run you ragged!

We had quite an adventurous time over in Mansfield, PA with the enthusiastic crowd that assembled for “Feminists Are Funny”. After traveling over hill and dale and even enlisting a Sherpa guide at one point (a long story...) we reached the beautiful Tioga county, where Mansfield University is smack dab in the middle, with a campus carved out of a mountainside. As we ascended campus to the theater building, I was reminded of visiting the island of Delos in Greece and ascending high above the ruins of the ancient town to the temple of the highest honor: the theater! This was a good sign for Mansfield, I thought. It was a good omen and we enjoyed a great audience with enthusiastic feminists, many of whom happened to be young men, who laughed AND asked questions. Thanks to our brothers in solidarity! My only disappointment in our Mansfield University show was the apparent lack of women-supportive activities on campus, especially in March of all times, when it's supposed to be Women's History Month. I was relieved somewhat at the end of show to hear about women's centers in the area and a plea from a lone female on the boxing club for other women to join. How bad-ass is that? She should have a bunch of women join up now. Maybe they can box in Guerrilla Girls on Tour! masks like the wrestlers in Mexico!

Posted by Guerrilla Girls On Tour at 11:55 AM No comments: