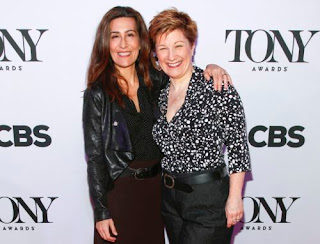 I loved the metaphor Lisa Kron used in her Tony acceptance speech for best book of a musical. She said that the house we all occupy has many rooms but that we seem to just stay in the living room.  Cheerfully egging us on she declared, “Wouldn’t it be great if after this season we didn’t just all go back into the living room?”

Guerrilla Girls On Tour used to use similar imagery whenever someone asked us why we were demanding more plays by women be produced.  We would smile and throw our hands on our gorilla-masked faces and exclaim, “You can eat strawberry ice cream all your life but we are here to tell you that there are many other interesting flavors available!”

Along with so many other theatre artists and fans I am thrilled at Kron’s win as well as Jeanine Tesori and Lisa Kron’s Tony for best score, making them the first all female musical writing team to win. But waking up the morning after the awards I had to drag myself out of bed because I know what is coming and it exhausts me.

I fear that instead of a steady increase of women writers on Broadway, everything will go back to the same-old, same-old next season.  And by same-old I mean that women and people of color will be tokenized – there will be one of us working at any one time so that when Broadway is accused of being sexist and racist they can point to that one woman or artist of color in any category to “prove” that women and artists of color are indeed thriving on Broadway.

This year it was reported that Broadway would see an “explosion” of women with shows by three female composers, five female lyricists, two female bookwriters, four women directors and two female playwrights. Yet, for the 2015 Tony Awards, women were shut out of nominations for direction of a musical, choreography, costume design of a play and orchestrations. Only three acting nominees were non-white and those comprised the total number of people of color nominated in any category.  Yes, you read that correctly, there were only three people of color nominated across all Tony categories including the special Tony awards.

Guerrilla Girls On Tour launched several sticker campaigns at the turn of the century aimed at theatres that did not produce any plays by women.  We would head into the bathrooms during intermission and place these stickers in the toilet stalls. 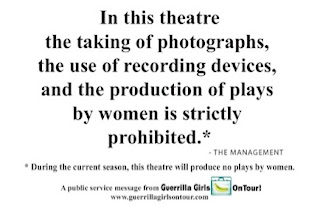 After stickering these theatres for few months they would announce that their next seasons would include one play by a woman at which we would rejoice (and take full credit for the change). But we noticed a pattern.  After producing a season that included women these theatres would go back to seasons of plays by white men, pointing to their previous season as proof of their dedication to diversity.  In fact, there are many theatres in New York and across the US that still do not include one single play by a woman or writer of color in their entire mainstage seasons. (The Roundabout is one with a consistent track record for seasons by all white male playwrights.)

Presenting one play by a woman or a person of color in a 5 or 6 play season is not enough. One or two Tony’s to women composers, playwrights, directors, bookwriters is not enough.  Without the vision of women and artists of color, the theatre is like a musical without a second act.  The solution to the static face of theatre and the slow pace of change on Broadway could be very simple.

So yes, Lisa Kron, you are absolutely right and I thank you for mentioning the many rooms in the mansion known as Broadway where creativity lives. Let us all now rise from our comfy sofas, love seats and easy chairs and explore the mansion, shall we?

Posted by Guerrilla Girls On Tour at 9:42 AM No comments: