REPORTS FROM STOCKHOLM and WPIC 2012 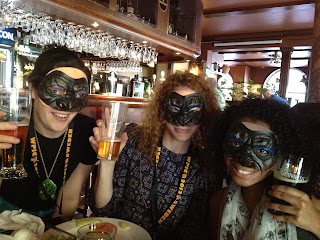 As often as we can, Guerrilla Girls On Tour! tries to bring together badass feminists and women artists to celebrate their talent and create solidarity. Well, the Women Playwrights International Conference hosted by Riksteatern, the national touring company of Sweden, did this in a big, wonderful and global way!  We toured to Stockholm in August of 2012 to participate and perform at WPIC 2012.

Bleary-eyed and drunk (figuratively, much to my disappointment, airlines always had the gin and tonics flowing when I traveled around for my poetry tour in the 1960s) from an international flight, the Girls - Aphra Behn, Fanny Mendelssohn, Josephine Baker and myself checked into our ultra-chic Swedish hotel in the south of Stockholm.  Then we headed up to the Sodra Teatern, the beautiful venue right on the water, where the conference was being held to sign-up for all the fabulous lectures, workshops, readings and performances we wanted to see over the course of the week.  Nothing could prepare us for the illustrious, fancy opening ceremony to come - Stockholm's City Hall, with gold-gilded walls, beautiful mosaic painting and stately terraces. 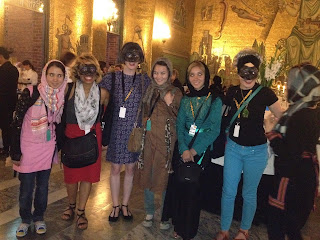 With women playwrights from Afghanistan

We tried to imagine what it must be like to receive a Nobel Prize in the room where they were handed out.  Women don't receive those very often, and Guerrillas... well the odds aren't great, but one can dream! 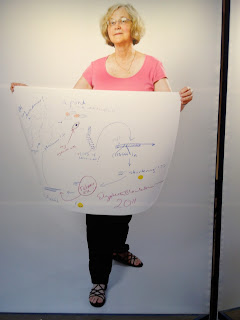 WPI, a fabulous organization: Women Playwrights International, hosts these conferences and themed the Stockholm Conference "The Democratic Stage".  We invite all of you to look up this organization and take part! http://www.wpinternational.net/

Here's a debriefing:
WPI is a non-profit and non-governmental organization dedicated to facilitating communications, meetings, interchanges, and activities among the international community of women in theatre. This is done mainly through maintaining ongoing international Women Playwrights Conferences every three years at different locations in the world. The mission of WPI is to further the work of women playwrights around the world by promoting their works, encouraging and assisting the development of their works and bringing international recognition to their works. ”Women Playwrights” shall be understood to include all women working in the theatre of all races, classes, ages, ethnic or religious background, sexual preferences, and women with disabilities.

On our second day we attended a smorgasbord of keynote speeches focused on the Arab world with Nidal Al Achkar, founder & director of Al Madina Theatre in Beirut and most charismatic women known to walk the planet, Mona Knio, Chair, Department of Communication Arts at The Lebanese American University... 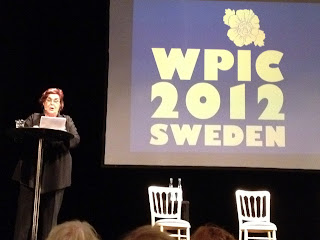 ...and last, but not least, the young and fearless Sondos Shabayek, Egyptian journalist, dramatist, director and activist, who told us about her experience taking part in the protesters at Tahrir Square in Cairo. Sondos gathered stories of several protestors in Cairo and compiled them into a theatre piece called The Tahrir Monologues, stories from the revolution. (www.tahrirmonologues.com) 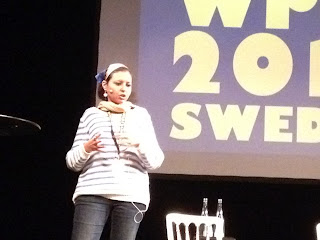 Sondos Shabayek talks about protesting in Tahrir Square in Cairo

The inspiring day of Arab feminists was completed with the Scandinavian première In the Lost and Found: Red Suitcase, written, directed, and performed by Lana Nasser from Jordan, winner of last year's Etel Adnan Award, a three-part award for an emerging Arab playwright presented by WPI and Nidal Al Achkar, who gives each winner a week run in her cutting-edge theatre in Beirut, the Al Madina Theatre (www.almadinatheatre.com).

My spirit was lifted by all these strong, confident and liberated Arab women who were expressing themselves through theatre and refusing to be shutdown by any political, social or gender-based prejudices.  They were mentoring and inspiring each other, and in turn, everyone at the conference.  They definitely struck a deep chord with me and I couldn't help thinking about the disparity in the United States.  We have no real support system of strong women theatre artists to mentor and help younger theatre artists.  Women who have succeeded in winning leadership positions in theatre around the US and the world should make it a top priority to mentor younger women, and be active!  We may consider ourselves more developed than the Arab world, but our apathy sets us back decades.  As Josephine Baker so aptly put it in our show, "The fight for gender equality never takes a day off!”

The perpetual summer sun was shining in Stockholm city as the conference was in full swing.  Feast your feminist eyes on these seminars/workshops: Women and Creating: Rights and Possibilities, What does Red Riding Hood carry in her basket?, Mapping yourself, Do you feel understood? Young Women Playwrights around the Baltic Sea were just some of the fabulous workshops taught by women from all around the world.

The women, along with all of us GGOTs were shocked when three members of the Russian feminist activist group, Pussy Riot, were charged with “hooliganism” and sentenced to two years in jail for speaking up against Putin.  It is shocking and appalling that in 2012, such a monstrosity and disregard for free speech is happening to our Baltic sisters!  GGOTs and the other women at the conference marched through the Old City and gathered at the main square and joined in on a global protest with speeches, songs and chants. 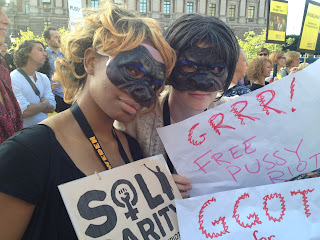 What an awesome way to spend the day!  I have to say we Girls get some strange looks in our wigs and gorilla masks, but never so much as when we were marching through Stockholm chanting “Free Pussy Riot!” J 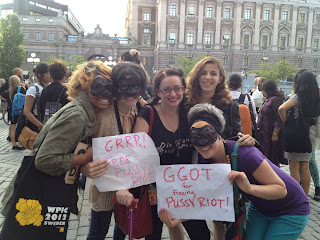 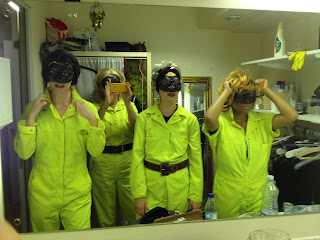 The excitement for our show, Feminists Are Funny, had been mounting all week and we wanted to do our very best, high-energy, madcap feminist mayhem kind of show for all the ladies at the conference.  Talk about feminist rock stars!  We were totally impressed with all these theatre artists and set the bar very high – we were pounding bananas like no tomorrow.

And we needed the potassium, because the amazing energy in the Dramalabbet where we performed was intense!  These women were fantastic!  Clapping, cheering and talking back – “Ladies and Gentlemen, THIS is what a true feminist looks like!” 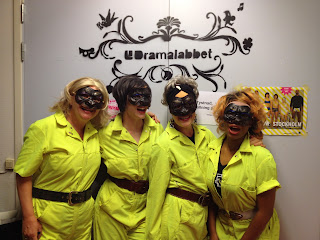 We had a tremendous night.  Thank you to WPI for having us Girls, and a special shout out to all the incredible women we met who are kicking theatre butt around the globe.

Our last day of the conference was our Street Theatre workshop!  We had about 25 participants and they were burning to add their issues to the idea board for potential street theatre pieces. 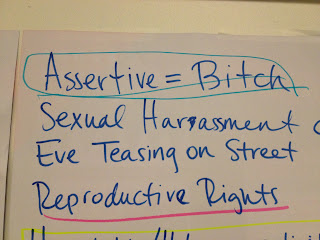 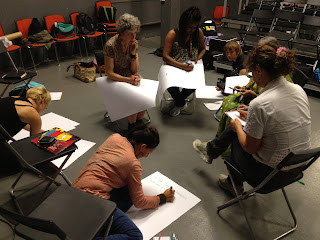 My favorite was the “Normal, Natural” group who used the 16-count movement sequence we gave them as a way to create the ideal “normal, natural” heterosexual couple.  Hilarity ensued.  Adorable Swedish girls playing in the fountain outside the theatre stopped to clap along and watch and you couldn’t help but hope that a little bit of the message floated into their sponge-like brains.

We really did have a mini Feminist UN, with groups from Sweden, the UK, Jamaica, Estonia, India, the US and more coming together to collaborate on universal issues.  It may be expressed in a different ways, but I hope the ladies involved saw how similar their struggle as feminist theatre artists was.

Not too long after, Aphra and I left on a jetplane while Josephine and Fanny continued on to Malmo, Sweden and the rest as they say, is Feminist History!

Keepin’ it Normal and Natural (whatever that means!),
xoxo
Anne Sexton

Posted by Guerrilla Girls On Tour at 9:02 PM No comments: