When you’re a Jet you’re a rapist? 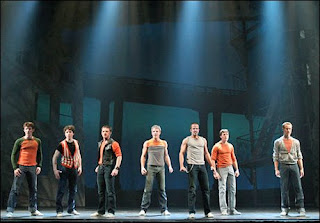 I saw the revival of “West Side Story” on Broadway last night. Directed by book writer Arthur Laurents who is quoted in interviews stating that his revival would be “…radically different from any other production of West Side Story ever done. The musical theatre and cultural conventions of 1957 made it next to impossible for the characters to have authenticity. Every member of both gangs was always a potential killer even then. Now they actually will be.”

Sitting in the darkened audience I never believed any of the members of either the Jets or the Sharks gang was a “potential killer” while watching the mostly (except for the dancing) mild production. The closest they came to bloodthirsty was the frenetic moves sung to “boy, boy, crazy boy, just keep it cool. But in Act II scene 4 Anita is taunted by the Jets gang when she comes to their hangout to find Tony and give him a message from Maria. In the Broadway revival the scene turned violent as the Jet’s gang threw and pinned Anita to the ground then held her dress up so that actor playing A-rab could unzip his pants and force himself on top of her before being stopped by the entrance of Doc. Well, that’s where the show ended for me. The Jet’s aren’t potential killers they are potential rapists.

Not being able to shake the memory of that scene I went straight to the libretto on my bookshelf when I got home to see how the original scene was written. Here is the stage direction from the published libretto; The taunting breaks out into a wild, savage dance with epithets hurled at Anita who is encircled and driven by the whole pack. At the peak she is shoved so that she falls in a corner. Baby John is lifted up high and dropped on her as Doc enters and yells “Stop it!”. I am not sure how it was played in the original Broadway production but it is clear that assault, not rape, is the direction described in the libretto. The racist epithets Anita experiences make her the victim of a hate crime. Yes the gang picks up one of their own members and drops him on Anita but everyone keeps their pants on.

I next went to youtube and watched this scene in half a dozen amateur productions of “West Side Story”. Each one of them suggested that rape was what the Jets intended (and, by the way, were entitled “West Side Story Rape Scene). Could it be that in the over 50 years since West Side Story first opened nothing has changed in how our culture views rape? I’m not against showing rape scenes in theatre but in West Side Story rape is presented as acceptable, everyday behavior. OK, so maybe in the 50’s things were different. But I’m disappointed that the production didn’t break through any of the old ideologies of our culture or of how this scene has typically been staged. The Jets are an average gang of teens who smoke, smack each other around and rape women. When you’re a Jet you’re “the swingin'est thing, little boy you’re a man, little man you’re a king.” On Broadway when you’re a Jet you’re a rapist and that’s definitely not cool.