OPED: The Broadway League, Casting Directors and the Tony Awards

Broadway is gearing up to celebrate the best of the season by handing out Tony Awards to directors, designers and performers. Many have argued that casting directors, those savvy women and men who find the talent for Broadway plays and musicals, should be recognized in a new Tony category – Best Casting.  But casting directors are currently seeking another kind of acknowledgment – the right to unionize.

Workers on Broadway have long been member of unions. Actors, stage manager, directors, choreographers, technicians, ushers, and even press agents are represented by 17 Broadway unions. The inspiration for many of these unions came from exploited workers wishing to prevent producers from taking advantage of them. There are now limits to the number of hours an actor can rehearse and who owns the rights to a play or musical a producer helps to develop, all because actors and playwrights are represented by strong unions and guilds.

Casting directors who work in film and television have only recently been provided protection by the Teamsters union which negotiates contracts for them. When a casting director casts a movie they receive benefits like health care coverage, pension plans and a decent wage. About a year ago, 40 Broadway casting directors took a nod from their film and television counterparts to become members of Theatrical Teamsters Local 817. They asked the Broadway League, the bargaining organization that recognizes all of Broadway’s unions, to recognize them. The League declined, stating in a letter that casting directors were “…independent contractors…separate businesses with their own employees and typically work on more than one show at a time within and outside our industry.”

Yet, the Broadway League depends heavily on casting directors who usually become involved in plays and musicals at the critical early stage, when a shows development rests on getting the best actors on the team. Casting directors are the conduit between producers and celebrities, those unionized stars who can guarantee the financial backing of a production.

During the 2016/17 season almost 13 million people attended Broadway shows which grossed almost a billion and a half dollars. It was the highest grossing season in Broadway history and the second-best attended season on record. So why is the Broadway League pushing back against adding the all-important casting directors to the list of unions the League negotiates with?
Right now only 12% of the musicals on Broadway are directed by women - members of the stage directors union. There is just one women out of the eight nominations for a Tony for Scenic Design and two women out of the eight nominations for Best Lighting Design. Broadway designers are represented by United Scenic Artists. There are zero women nominated for Best Orchestrations whose nominees are all members of the Musicians Union. About half of the 40 or so Broadway casting directors seeking recognition from the League are women. In an industry notorious for its lack of women in top positions, it makes sense that the occupation with no benefits and low wages, the casting director, would have 50% women employed. When you think about it, these casting directors are presenting producers with an opportunity to creep towards greater gender parity on Broadway.

The Tony Awards are co-produced by the Broadway League and the American Theatre Wing. As you watch the actors, directors and designers accept their Tony Awards on Sunday night, remember they all have a strong labor association behind them. Perhaps there has never been a Tony for casting because it would force producers to acknowledge the value and input casting directors have on their continued success and, like the other nominees, recognize and negotiate with the union which represents them. 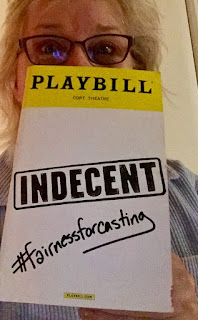 Posted by Guerrilla Girls On Tour at 1:34 PM No comments:

On June 3, 2017 I had the honor of performing ACT LIKE A FEMINIST ARTIST at the 2nd annual WOMEN IN THEATRE FESTIVAL produced by Project Y Theatre.

How can you not love the fact that PROJECT Y wants to create #GenderParity in theatre by going #BeyondParity and flooding NYC with new plays by women, directed by women, supported by women-led companies, and featuring lots and lots of... yes, women actors! Kudos to co producers Michole Biancosino and Andrew W. Smith.

Join me in supporting this important festival -- Do not miss Great Again, an evening of plays in two parts: Test by Crystal Skillman (directed by Jessi Hill) and In the Line by Chiori Miyagawa (directed by Kristin Horton and choreographed by Sonoko Kawahara). Both plays were commissioned by Project Y Theatre Company and written as a response to the November 2016 election. Read a recent REVIEW.

For info about other events at the WOMEN IN THEATRE FESTIVAL click HERE OR check out their FACEBOOK PAGE!


GLAD TO SEE SOME OLD FRIENDS AT #WITFESTNYC


Posted by Guerrilla Girls On Tour at 8:23 PM No comments:

From Los Angeles to Pomona and onward to next season...

And that's a wrap! 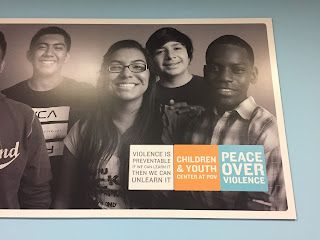 "Act Like A Feminist Artist - a Guerrilla Girl Unmasks"

Audiences from New York to Los Angeles to London to Flagstaff, Arizona found out what it's like to be a feminist masked avenger Guerrilla Girl!

WRAPPING UP IN SOUTHERN CALIFORNIA

The 2016/17 tour came to a close in May when I headed to Southern California and had the privilege of speaking to the volunteers at Peace Over Violence in Los Angeles. These are the women and men who answer the LA Rape and Battery Hot Line, lead seminars in ending violence in classrooms and educate via sharing their own personal experiences. It was a very special evening for me to be back where I began my journey - in 1989 I began my training at Peace Over Violence as a volunteer on the Hot Line. You can read about how Patti Giggans of Peace Over Violence was a pivotal influence for me to wind up as an activist artist in UN/MASKED, Memoirs of a Guerrilla Girl On Tour. Thank you Patti and PEACE OVER VIOLENCE! 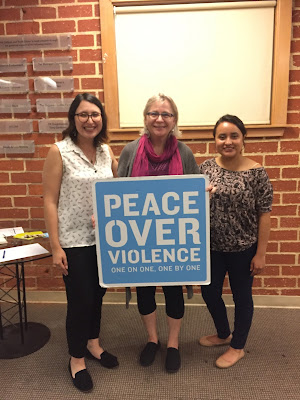 After Los Angeles I headed east to Cal Poly Pomona for a talk/reading/book signing and a poster making workshop. Feminist energy flowed as the 20 women in the workshop came up with great posters addressing the gentrification of our cities, body image and Trump.


Here are a few drafts of the Cal Poly Pomona posters 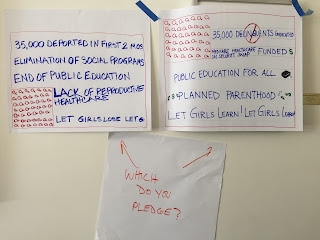 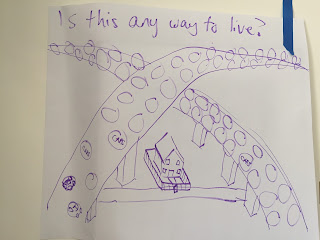 I flew back to New York City just in time for the annual ASJA conference (American Society of Journalists and Authors.) If you write nonfiction, you should check out ASJA. It is an amazing organization with a lot of resources and support for writers. 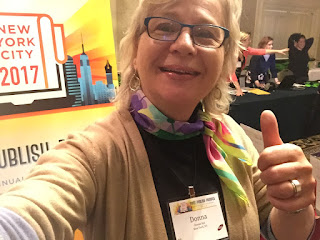 WHAT'S NEXT?  - "ACT LIKE A FEMINIST ARTIST" will be a part of the Women in Theatre Festival in NYC. For info click here.

NEXT SEASON IS SHAPING UP - Stay tuned - the 2017/2018 Tour will include stops in Florida, Wisconsin, Illinois, New Jersey and Pennsylvania.

I'll be back in June with more announcements: Where you can find my new column on art and politics and the very first stop of the 2017/18 season.

Posted by Guerrilla Girls On Tour at 7:38 PM No comments: