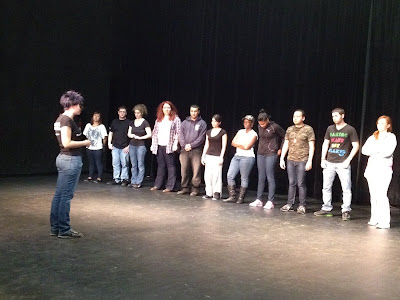 What a great workshop at the College of Staten Island! I was so excited to dust off my mask, get back on the road and teach some theatre.

The ride on the SI ferry was beautiful and as my first time on Staten Island I was amazed at how big it was!

The students were a mix of performers and "non performers," but by the end of the workshop you couldn't tell which was which. You could tell there were students more hesitant about learning improv from Gorillas, but we showed them how to get nice and loose. 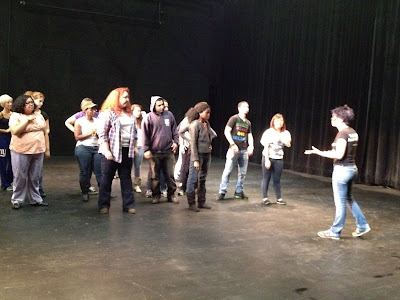 We started with some warm ups to get them out of their self consciousness, playing my favorite game, "YES!" In this game, one person does a big physical movement with a sound and then everyone shouts "YES!" and repeats it. The students had great fun pushing their own boundaries. And “YES” is such a great word.

We moved on to creating their own devised pieces made up of a few elements: a choreographed dance, a strong entrance and exit, and a short scene with defined characters. It was incredible to see the once hesitant students suddenly leading their group when it came time to use their creativity.

The pieces were all excellent, bursting with life. Everyone had an amazing time performing and working as a team to create something original. Some pieces had themes of strength (even letting out their own "GRR!" which I can't help but think was inspired by the Guerrilla Girls On Tour) and playfulness. Some even used Michael Jackson for inspiration. But the one thing that defined all of the performances was that you could see the growth and confidence in each of the performers and how well they had used their creativity to have fun as an artist.

Until we meet again on the Staten Island Ferry or elsewhere, 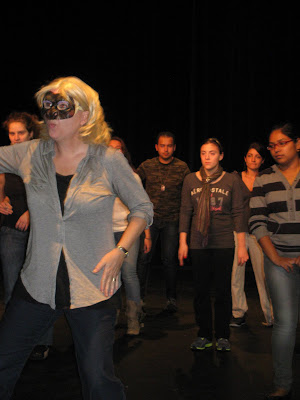 Just back from The College of Staten Island - the college with the best theater stats we have ever seen in a college! This year the students are putting on two plays, both written by women. They also have a course that focuses on women in theater and an awesome women’s center. Located in the former Willowbrook State School, (a state-supported mental hospital), the College of Staten Island, has a beautiful and expansive campus. The stairway that led from the theater to our dressing room though was outfitted with a hefty barred door - that reminded us of the building’s history.

Our tech crew was stellar - we totally wanted to guerrilla-nap our baboon boy and all-around-tech-rock-star, Dan. And the student volunteer actor, Amy, was quick, witty, and nailed every line. I wish we could have stayed longer and gotten to know more people. Personally I think Staten Island could be a perfect ‘natural habitat’ for a band of Guerrilla Girls [when we’re not] on Tour.

Hope to see you on the road!

Posted by Guerrilla Girls On Tour at 5:53 PM No comments: