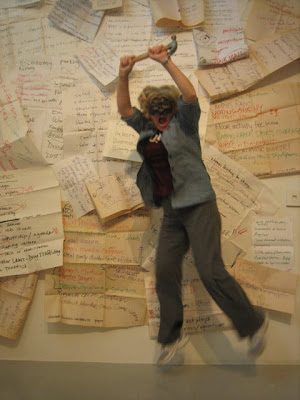 I became a Guerrilla Girl in 1997 and lead the Girls into their primary activity for the next three years - addressing discrimination in the theatre world. In 2001 the original Guerrilla Girls group split into three groups: Guerrilla Girls On Tour! is one of those groups.

This split was preceded by lots of going back and forth between lawyers representing members who were no longer anonymous – FYI, you can’t sign a legal document as a dead woman artist. I agreed, with three other former Guerrilla Girls, to form Guerrilla Girls On Tour! a touring theatre company that would continue fighting discrimination with humor and fake fur. Another new group, Guerrilla Girls BroadBand did the same. But problems surfaced when the new herstory of just how our new groups came about was not embraced and celebrated by all. I realize that change is not always welcomed and that sometimes the truth is a bitter pill. But here’s the upside – sexism still runs rampant around the globe and Guerrilla Girls On Tour! is actively fighting it with humor and scary statistics. 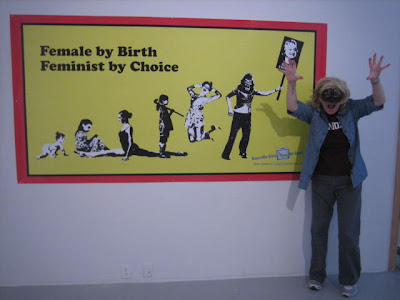 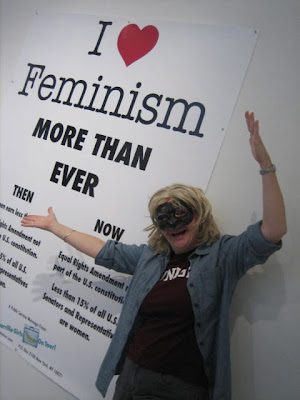 (Two of our most popular posters)

In 2001 Guerrilla Girls On Tour! took a forward swan dive into the future and began our new mission – to make great comedies about feminist ideas and tour them around the world. In one week we will be exhibiting the video and visual works that cropped up out of our touring theatre along with the work of the other new Guerrilla Girl groups as well as some of the work of the original collective at Rutgers. The show runs June 1- July 18. This will be a chance for all to see where we’ve been, how far we’ve come and the complex journey we’ve been on. 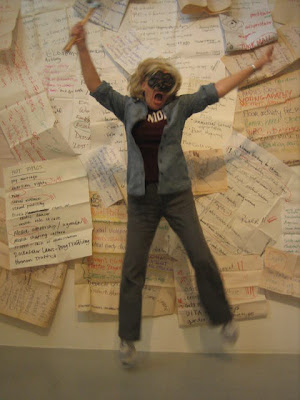 (Me in front of part of our exhibit - a huge collage
from workshops we've led around the globe listing
the issues that participants want to address)
What we now refer to as the “banana split” will be on view for the first time since 2001. Guerrilla Girls On Tour! will make sure it has extra whipped cream and a cherry on top! See you there! – Aphra Behn 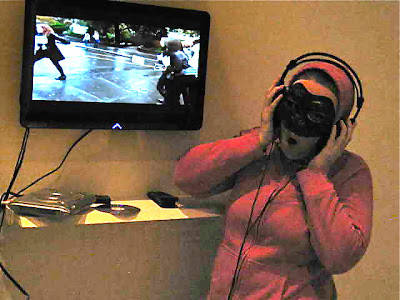 Posted by Guerrilla Girls On Tour at 6:14 PM No comments: