March took the “UN/MASKED” tour to Flagstaff Arizona and the annual Women’s Conference at Northern Arizona University where I presented “ActLike a Feminist Artist – A Guerrilla Girl Unmasks.”

This checks Arizona off Guerrilla Girls On Tour’s US State list – we have now been to every state except Mississippi and Alaska.  (Head ups, all Mississippians and Alaskan feminists out there.)

If you have never done it, drive from Phoenix to Flagstaff.  The drive takes about two hours and is a gradual gain of 6000 feet of elevation. The saguaro cacti of Phoenix give way as you come over a steep rise and the Bradshaw Mountains appear in the west. On the descent into Verde Valley the snow capped San Francisco peaks come into sight as well as the red rocks of Sedona. Gorgeous. 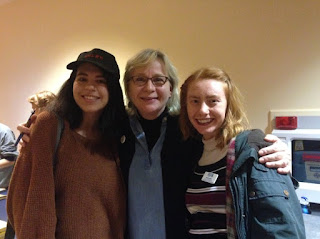 The NAU Women’s Conference is coordinated by the Associated Students for Women’s Issues and is well attended by the diverse and curious make up of NAU’s faculty and students. Over 100 people assembled in the auditorium of NAU’s Cline Library (one of the largest campus libraries I have ever been in). The stage was set with the traditional Guerrilla Girls On Tour props – water and bananas.  Since I was contractually not allowed to throw the bananas, one savvy theatre major in the third row offered to throw them for me. Thanks a bunch. 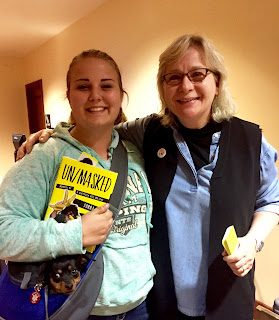 My talk, “Act Like a Feminist Artist” has been morphing into a motivational lecture and the response to this new version was suburb. Kudos to that same theatre major for asking about how to “queer up” the theatre world.  Answer: Look for theatre companies that are already queering it up and go work with them. Example:  Oregon Shakespeare Festival which for the first time in their herstory will present 6 plays by women and a same sex couples version of “Oklahoma.” Then, continue to make the theatre you make and be prepared to endure for the long haul. 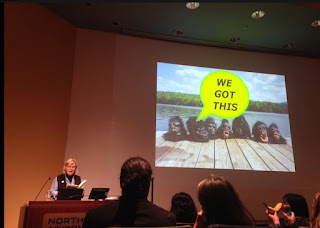 How does one act like a feminist artist, you might ask? Well, begin by embracing the truth. The Truth is the heart of good art and good activism. Artists are truth tellers.  We live in a world that is made up of facts and reality. These days, facts and reality are constantly challenged. So accept that there is a long road ahead. Be physically, mentally and emotionally strong. Workout, read, do yoga, drink tea, eat bananas, pour yourself a glass of wine - whatever it takes. Then, make sure you gather evidence. Do the GGOT 10-minute research technique – when you go to a gallery or museum count how many works by women they are presenting. This evidence is your weapon. Use it in your art.

Thank you to all the fabulous feminists of Arizona who came to hear me speak.  Until we meet again.


Aphra
Posted by Guerrilla Girls On Tour at 2:58 PM No comments: