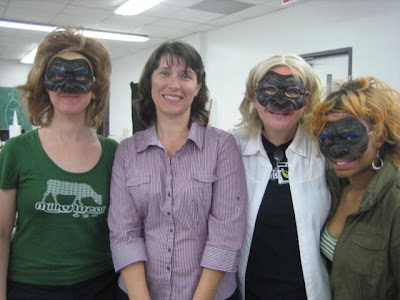 First off, I have to give a shout out to Kate Roark, theater history professor at UHD. I loved meeting you. You are smart, funny, intelligent, athletic (rides her bike to work everyday), and great with your students (even sleep deprived). There's always room on a GGOT road trip for you!

Now, (make your reading in your head voice light and mystical):

"You're making a spectacle of Feminism" - angry female,

"I'm playing devil's advocate, I'm from a Christian family (Happy Easter), and with all these liberals coming out, have you seen a trend in discrimination against conservative white men?" - calm female

"If you are a feminist and you define it by equality, doesn't that mean you are looking to discriminate against men?" - sincere male

(return to your natural reading in your head voice, unless you have an Edith voice you use when you read my diary entries, you can use that voice now!)

At least once during every Q & A "The Apocalypse of Feminism" would ring through my head and root me to the spot, and start a little sweat dripping down my back if it wasn't all ready there from doing the traditional feminist dance (see the show or stay ignorant). These statements (Apocalypse) mean two things to me. Feminism has accomplished so much we don't need it anymore or we've done what we could and this is it.

Read them again, I'll go pee. Too much information? I apologize. Now set them aside a moment, I have to finish the tour and there'll be a big Texas round up at the end.

After a short break we went off to a poster making workshop with Grrl Action at the Rude Mechs. (Rude Mechanicals of Austin Texas Theater Company). We did get lost, but that's not because Edith the navigator has no tolerance to alcohol and had half a beer, or because Edith sober or tipsy has no sense of direction, but because google maps was wrong. HA! So we were a little late. I apologize.

Grrl Action is a program run by the Rude Mechs and a more incredible group of young women I have never met. WHY?

They were willing to participate.

They were generous with their ideas and their creativity with each other and with us. 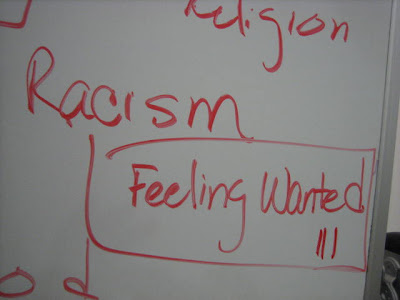 Their concerns: deforestation, feeling wanted, Israel, teenage dating, Lesbian and Gayism, violence against women, body image, not as strong as boys, and about 30 more topics. In about 4 minutes. 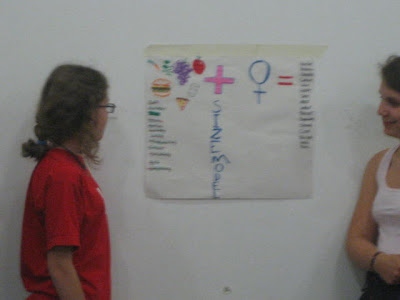 They thought over everyone's ideas before voting.

They asked whose idea a topic was if they didn't understand it and asked if she could explain.

They explained their ideas and took all questions seriously.

They stopped for snacks.

They rescued grasshoppers from inside and brought them outside.

They stood up and shared their work process.

They listened to each other.

They gave positive feedback to each other without any hesitation.

They were supportive of their community.

They were able to express their strengths and insecurities as individuals and as women.

We the aging women of America are in good hands. I did not want to leave. 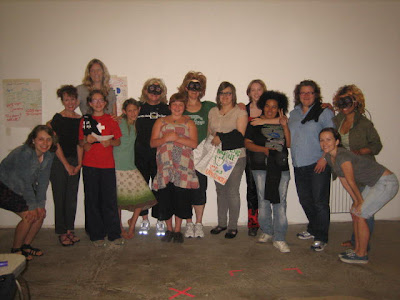 The next day we had lunch with Women and Their Work. ( A visual and performing arts organization that serves as a catalyst for contemporary art created by women living and working in Texas for over 30 years). We got into a fabulous discussion about feminism. The word. Not the concept, principles, or movement. The actual word itself. One of the women at the table (there were 6 of us) won't use it. So here we are. The Apocalypse of Feminism. (Now I've got Ted Baxter's voice - Mary Tyler Moore Show - in my head and he's trying to sound really ominous. Rhoda would be more appropriate). Has it arrived? or do we just need a new word? Do we need to fix the old word? Are we done? Have we done all we are ever going to do? We have come a long way. One of the women at the table went to law school back in the day and remembered being told she was taking away the place of a man. That wouldn't happen today. Not out loud anyway.

Are we equals now? Are the discrepancies experienced today not the result of discrimination but the natural differences between men and women. Is that what we are struggling through now? Will we ever be able to define equal when men and women are so different? This is not new. But it's what I'm thinking right now.

Posted by Guerrilla Girls On Tour at 8:31 PM No comments:

Deep in the heart of Texas! 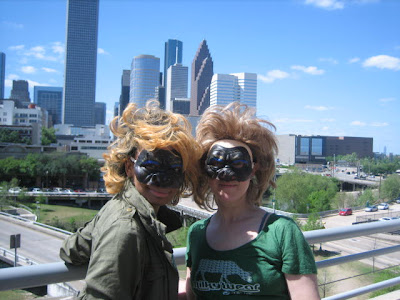 We just spent an amazing week in Texas! We kicked this tour off in Houston, where the most fabulous tour guide/professor, Susan, drove us everywhere we needed to go, including an emergency Starbucks run and out to a delicious Vietnamese lunch!

At noon, on our first day Aphra, Edith and I we were scheduled to speak at KUHF, a Houston public radio station, about the life of a Guerrilla Girl On Tour! and the ongoing struggles of women in theater. I had never been in a sound booth before so I was excited. As we sat in the green room we joked about what we were going to say and the section from “Feminists Are Funny” that we were to perform. I felt so ready and empowered but then, of course, as soon as we went on air, I got so nervous! St. John, our host, turned to me and asked me the question, "Has the need for feminism changed over the years?" Of course I knew the answer! Had I been in my right mind, I would have said, "Yes, it has. Women have newer things to contend with. The media is constantly in our face, telling us how we should look and smell; how much we should weigh. We don't protest with picket signs. Instead we create performance pieces, or raise funds for women who have been victimized. Today, we have to speak out about women's health care rights, and equal opportunities in the work place..." Had I been in my right mind, I would have gone on and on and everyone would have applauded the brilliance of my answer. Instead, I was stuttering like Porky Pig up in there! I stumbled, and floundered, and finally squeaked out some weird answer, that I'm sure made no sense at all... uggghh... That moment will forever haunt me! 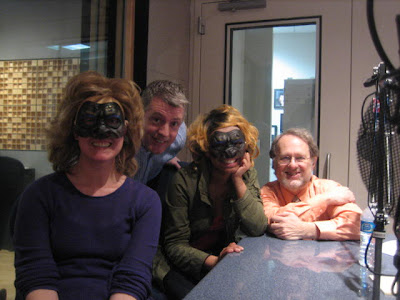 Later that night we performed “Feminists Are Funny” at the University of Houston Downtown, where we were greeted by a warm, welcoming faculty and student body. Frank, the school’s Technical Director, led our tech and he was amazing! Sort of a jack of all trades Frank not only kept our tech running smoothly he was also there if we needed anything. 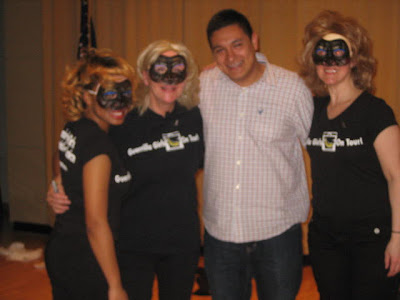 We also received a huge Texas welcome from Kate Roark, the professor of theatre who organized our tour to Texas. She was helpful and open and she's one of the only people, ever, to identify our slide of funny feminist Charlotte Cushman on sight! Lastly, we met Dr. Lyttle, the head of UHD's theater department. He was so jovial and happy to meet us. It really made us feel welcome (Although, I think I may have upset him a little when I revealed the UHD theater stats :{ It wasn't the worst theater department we've ever been to, but there was definitely room for improvement when it came to opportunities for women. I'm just sayin'.) We gave a great performance, and the audience was really into it. I just love when the audience get's all of our puns, one-liners, prat falls and feminist humor.

The following day, we hosted a poster-making workshop for the combined interdisciplinary arts department. Initially, turnout was good. They were into the warm-ups and our theater games and everyone had great poster ideas. But when it came time to actually create the posters, everyone except for four women, left! Apparently each class unit is an hour long and everyone had an exam to run off to. Oh well, we made some great posters with the few remaining students and got to chat more with Kate about theatre.

The following day, we jumped in the car, and drove over to Austin. Now, I love Austin. It's a little funky and a little hippy dippy. It's forward thinking but still has that southern feeling. We arrived at this smallish, colorful building and I would have never, in a million years, known that that was our hotel. We entered the Kimber Modern, and were immediately impressed with its architecture, colorfulness and cleanliness. It was also happy hour, so we went straight for the snacks! It was a beautiful day and the three of us sat outside in the lovely courtyard and read newspapers, surfed the Internet, and chatted until it was time to go on to our next workshop. 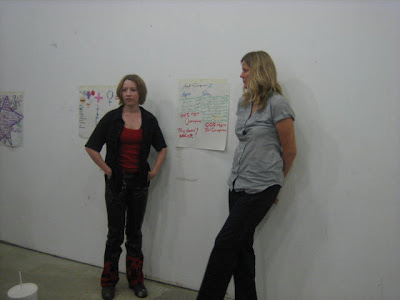 The workshop that night was sponsored by the awesome theatre company, Rude Mechanicals and their group Grrl Action -- one of the most incredible groups of young women and mentors I have ever seen. It was one of the most exciting experiences of my guerrilla life. We worked on making posters with teenage girls between the ages of 13-16. They were all so bright, and funny, and positive. They had so many ideas for important poster-worthy matters that we could barely fit them on the board! In the end they narrowed their ideas down to Plus-Size Models, Homosexuality, Violence Against Women, and Feeling Wanted. As we walked around the room listening to each group brainstorm we heard all sorts of talk about violence that's happened to them and feelings of rejection. It made me think back to when I was their age and how confused and lonely and all over the place I felt. They produced some brilliant, telling posters. During critiques, they were all super supportive of one another. No one said anything negative. Every sentence began with “I like the way....” They were so funny, and wanted to know if we were wearing wigs, and what our hair really looked like. I loved every second of it!

After the workshop Edith, Aphra and I chowed down on some awesome Austin food and the next day our spring 2011 tour officially ended. Diary, it was a great season. Until next time...

Posted by Guerrilla Girls On Tour at 7:27 PM 3 comments: