Guerrilla Girls On Tour! is seeking interns for 8 to 12 weeks in the following two areas:

As an anonymous group of activists, Guerrilla Girls On Tour! are all self-starters and volunteers and Internships with GGOT are not paid. However, interns will have access to GGOT and can expect to attend GGOT meetings, actions and participate in our how our organization functions, addresses sexism and creates art. We will work with interns to help them specifically achieve their goals within the scope of their GGOT work.

College level students who have completed their freshman year who have an interest in activism, art, theatre, marketing, public relations or social media should send a resume and cover letter of interest to 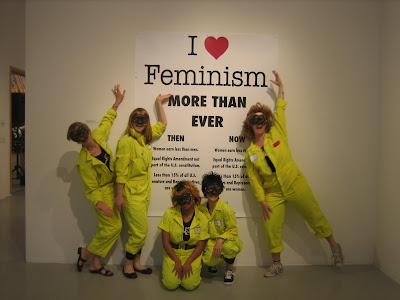 Posted by Guerrilla Girls On Tour at 8:53 PM No comments: 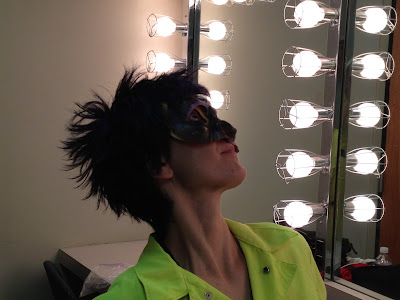 It’s been nearly 2 weeks since I returned to the Guerrilla Girls on Tour headquarters from Rollins College… and I have finally recovered from the high of feminism-gone-wild, otherwise known as the Veteran Feminists of America celebration. I’ll spoil the ending by saying that our last night there, the night of our performance, we opened our dressing room door and there stood Gloria Steinem – larger than life and by that time a familiar presence to us, Ms. Steinem floated into the room and apologized for interrupting our warm-up – she needed as place to wait for her ride to the airport. At every meeting Gloria – as she insisted everyone call her - was incredibly gracious, engaged, and well, down right awesome. We all flew high during the show - truly a performance of a life-time, blessed by the goddess herself.

Now back to the beginning. We left New York on a warm late-October morning and landed in Orlando FL amongst a sea of families headed to Disney World. After a short drive to Winter Park, we met up with Gail, of the Winter Park Institute, and settled into our home-away-from-home, a condo tucked away on a ‘quiet’ street, right next to the train tracks - more on that in a bit. 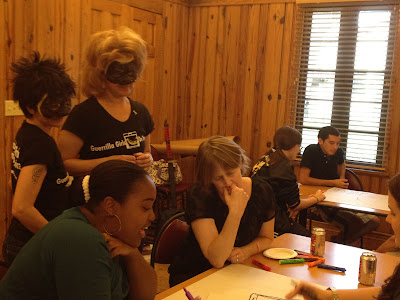 It had been a while since I was in the south and the Spanish moss and technicolor palms calmed my senses immediately. We had a fun and energetic theater workshop with the students our third day there. They were open and ready to try anything - movement, vocalizing, games, and tons of improvisation followed. Then, on to a poster-making workshop the following day - talk about a group that needed nearly no guidance. They gathered, shared ideas, broke into groups, and collaborated through 3, sometimes 4, drafts of their ideas, refining their message into ready-to-go campaigns. 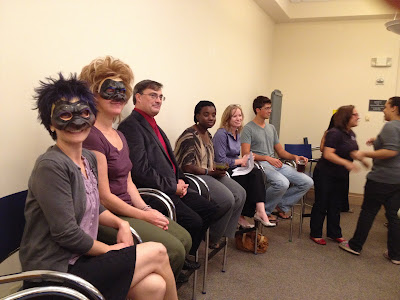 We participated in a panel discussion on sexual violence and gender equality the next evening of our residency. This was interesting and highlighted several things. First, the need to have a more clearly defined topic - sexual violence and equity were perhaps too broad. Second, know your audience. I have seen this a lot - a women’s center brings in speakers who are prepared to talk to students but the audience is full of advocates looking for more information. And so the group feels talked down to but people don’t really know how to say ‘OK - let’s get to the level 2 or 3 version of this talk.’ Third, a major sticking point in ‘rape education’ still seemed to be the presumed ‘yes’ and so girls need (apparently) to learn to use the ‘hard no’. Which, while frustrating is also a policy issue, as some campuses have rules that promote consensual - must hear a ‘yes’ - sex and this campus has no such policy. 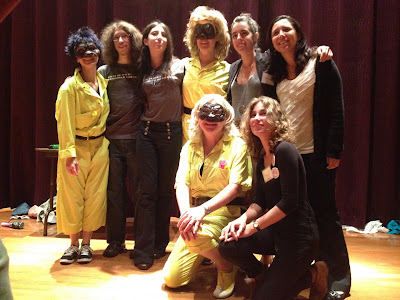 Finally we are back to the show - and what a show it was! Nearly 30 minutes longer than usual because so many people were happily sharing, participating, chanting with us, hugging us, and willing to share their own stories, up-coming events, experiences, hot flashes :), and voices. Whew! Thanks Rollins for a memorable trip...I'm signing off for now...

Posted by Guerrilla Girls On Tour at 11:41 AM No comments: