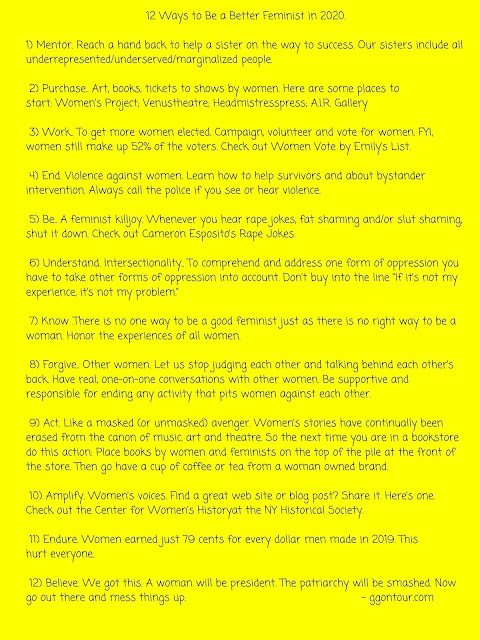 Posted by Guerrilla Girls On Tour at 8:50 AM

Email ThisBlogThis!Share to TwitterShare to FacebookShare to Pinterest
Labels: 2020, Be a Better Feminist, feminist, Guerrilla Girls


Every other year the Hemispheric Institute of NYU hosts a conference in the Americas – part academic, part performance, the conference is a gathering of 700 scholars, artists, students and activists who come together for work groups, cabaret, performance, workshops and lectures.  I was honored to be asked to present at the 2019 Encuentro and the theme “The World Inside Out: Humor, Noise and Performance.”

Most conferences I have attended are full of events and can be quite overwhelming.  magine 8 days of a morning, noon and night schedule to chose from. I managed to catch some incredible performances in both traditional theatre spaces, black boxes and on the street.  Discussions of political activism and art not only happened on stages at the University of Mexico City but over cups of strong coffee and flutes of frozen  margaritas into the evening hours. There was something for everyone and I was lucky to meet people from all over the world.

For my three hour workshop on creating street theatre – about twenty five savvy activists gathered to create some incredible work.  This was, thankfully, one of the first events of the conference and the energy at the workshop was palpable. Check out this piece created by the group “Mujeres/Poder.”

By day 5 I was ready for my lecture/presentation “How many feminists does it take to screw in a light blub: On creating feminist theatre in the 21stCentury.”  Simultaneous translations took place into both Spanish and Portuguese and I was a bit wary that the time lapse would kill some of the humor in my piece but it did not. The audience was incredibly responsive and reactive to my announcement that it was not a lecture but a feminist party!

Friends were made along the way – Mexico is a warm and welcoming country and I was happy to bond with brand new colleagues.


Thank you Encuentro and Mexico City!  Until we meet again.

Mucho Gracias,
Aphra
Posted by Guerrilla Girls On Tour at 5:18 PM No comments:

I am heading north from New York to Boston on an Amtrak Acela for a gig at UMASS Dartmouth's Center for Women, Gender and Sexuality.  This center was founded in 1970 and is the second oldest collegiate Women’s Center in the country. Cool. 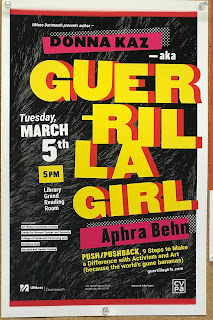 As I sip iced coffee and look out the window at the Long Island Sound I feel excited for this trip because it is one of my favorite tour stops - the return visit. Guerrilla Girls On Tour performed at UMASS Dartmouth back at the beginning of the century (feels so weird to write that). Feminist/theatreartist/Centerdirector Juli Parker invited us then and now. This time I head back to the campus sans mask for two reasons. One is to lead a poster making workshop and the other is to give my new talk, PUSH/PUSHBACK 9 Steps to Make a Differencewith Activism and Art.

After arriving in Boston's Back Bay Station I hope in a rental car and make the shortish drive to New Bedford, MA - a harbor town with a whaling museum and ferry boats to Nantucket and Martha's Vineyard. I find fresh scallops on the menus of most restaurants  nearby and am told this is the heart of scallop fishing on the east coast.

That night a snow storm hit the east coast and I wake up to discover that campus is closed on Monday – the date of my workshop.  This is why I always put an extra day into travel on tours that take place in winter.  Yep, better to be safe than sorry and I am able to reschedule my workshop for the next day.

Tuesday will be a marathon – workshop for 2 plus hours followed by my talk. I really hope my rental car has a snow broom and scraper in the trunk (it does!) because the snow is wet and heavy. It takes me a few starts and stops to get my windshield wipers working but I head off to campus midmorning for the workshop.

Mitch Berube of the Center greets me and we find a perfect parking spot! “That’s odd,” says Mitch, “because Mercury is in retrograde and since the snow storm everything is a bit off.” It seems my publisher has sent a case of the wrong books to UMass Dartmouth and instead of 24 copies of UN/MASKED they received a bunch of books on food styling!  Somehow I’ll make this work. (UPDATE: my publisher, Skyhorse, is sending UMASS a bunch of free copies of UN/MASKED. Yeah!) 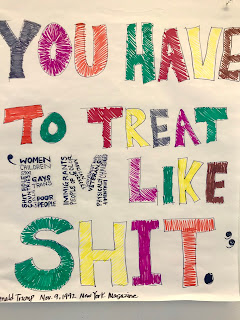 Workshop was awesome. I am always amazed at the posters created collaboratively in just two hours time.  After a quick break to grab coffee and refuel, I present PUSH/PUSHBACK 9 Steps to Make a Differencewith Activism and Art in the campus library to 100 students, faculty and locals.  They laughed, they cried, they got the 9 steps. It was swell.

At the end of the day I grab dinner with Juli Parker and JessicaHarris of the Center. We are old feminist friends now. This repeat visit reminds me that feminism is all about community.

Posted by Guerrilla Girls On Tour at 2:11 PM No comments: 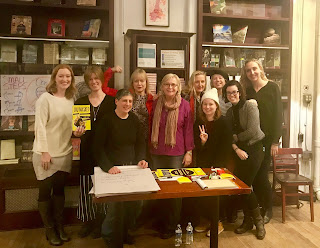 Posted by Guerrilla Girls On Tour at 2:11 PM No comments: