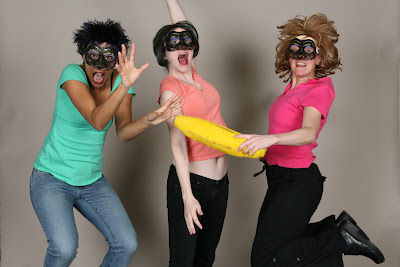 CHECK OUT OUR 2011 TOUR DATES HERE:
http://www.guerrillagirlsontour.com/currenttour.htm
WE WILL BE IN AR, TX, NH, MN, OH, NY AND THE UK!
Posted by Guerrilla Girls On Tour at 4:43 PM No comments:

1981 - League of Professional Women in Theater is founded by Julia Miles
www.theatrewomen.org

1989- Coalition of Professional Women in Arts & Media is founded. www.nycwam.org

1997 – A group of women request to revive the Dramatists Guild's Women's Committee. Board of DG and then executive Director Richard Garmise deny request.

1998 – The Guerrilla Girls begin addressing discrimination against women in theatre with “In this theatre…” sticker placed in toilet stalls of theatres in NYC that do not include any plays by women in their mainstage seasons.

1998 – Women in Theatre: Mapping the Sources of Power, On the 20th Anniversary of the Women's Project and Productions at The New School with support of Ford Foundation.

2002 - Release of a study, "Report on the Status of Women: A Limited Engagement?" prepared for the New York State Council on the Arts Theatre Program by Susan Jonas and Suzanne Bennett with the assistance of Guerrilla Girls On Tour!

2003-Women Count, a group of concerned dramatists come together and request the Dramatists Guild to revive the Committee for Women. Request is again denied.

-Guerrilla Girls On Tour premiere new play “The Herstory of Women in Theatre” , uncovering the vast contributions women have made to the art form.

2005 – The League of Professional Theatre Women include Guerrilla Girls On Tour in their CUNY-TV show “Dialogues with Notable Women In Theatre. The GGOT’s name the Roundabout Theatre the most sexist theatre company in New York City with a continued record of producing no plays by women and not hiring any female directors.

– Emily Glassburg Sands unveils the results of her economic study on discrimination against women in theatre at a townhall meeting in new York City.

- Princeton University sponsors a conference "Women in Theatre: Issues for the 21st Century."

- League of Professional Theatre Women create a committee to track stats on women in theater.

–A new group, 50/50 in 2020 is founded by Susan Jonas, Julie Crosby and Melody Brooks to take action on finding solutions re gender disparity in theatre.