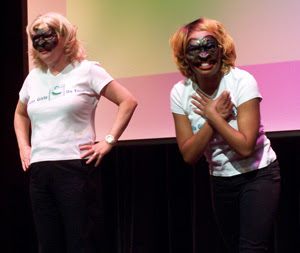 Julia and I were anxious about performing in a place called Club Down Under especially since it was on the campus of FSU Tallahassee, far away from the real down under in Australia. But our fears quickly dissipated for two reasons. The first was the sight of the place…a cool underground club with a small stage, couches, balcony and bar. Secondly, we noticed a set list in our dressing room from the show the night before – evidence that the Ting Tings had been there. Our new version of “Feminists Are Funny” is partly inspired by the Ting Tings and so we saw it as a sign from the Goddesses. It was pouring cats and dogs outside which might explain why the tech crew were no where to be found. Little by little in dribs and drabs some fabulous “event crew” wearing t-shirted techies showed up and we went through our show just in the nick of time for a 9PM opening of the house. This was the latest we’ve ever performed the show and I was not sure I could stay awake past my bed time but Julia rallied me by forcing me to eat handfuls of sun chips and a ham and cheese sandwich which tasted mysteriously like a hot dog right before we went on. Nicole and the board members of the FSU women’s center were on hand to give us support and Diana Alverez proved to be one of the best Chauvinisto’s we’ve ever had. I guess you can tell where I’m heading…the Florida Feminists filled the house and took it down. We didn’t go under in club down under, on the contrary, we floated to the top in spite of the pouring rain. I must say that Julia Child’s ad libs were in rare form….my favorite was when she body slammed me at the top of the show…this was her way of telling me my mike was off. It got a laugh which is all I ask for from fellow GGOT improv Goddess Ms. Child. After the show we found a cool bar that had 50 brands of great beer on tap and hung with the women and men from the Women’s Studies department. LNGS….late night; great show.