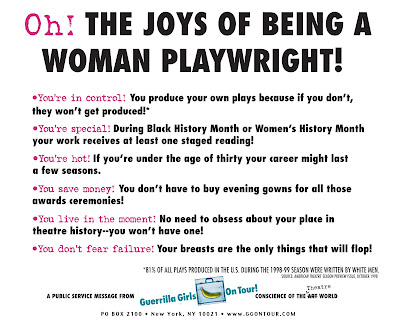 A Noise Within Glendale - CA**

* indicates no women directors have been hired either

^indicates at least one playwright is a man of color, but no female playwrights

AND IF THIS ISN'T ENOUGHT TO MAKE YOU CREATE SOME ACTIVIST STREET THEATRE RIGHT NOW, READ ON....

Asians Americans comprise 12.6% of New York City and is the city’s fastest growing minority group, yet they were seen in only 2.3% of all roles on New York City stages in the last five years:

46% of the roles played by actors of color were roles that did not specify race (non-traditionally cast). This number, however, was still only 9% of total roles available. African Americans were far more likely than any other minority group to be cast in a role which did not specify race. Breakdown by ethnicity as a proportion of all roles which were non-traditionally cast:

When looking at Broadway as a separate industry, the representation of Asian Americans dropped significantly to 1.5 %:

THEATRE FOR A NEW AUDIENCE:

*includes new shows that opened on Broadway during this period (with the exception of “Soul of Shaolin”, a special event imported directly from China), subsequent replacement casts, and the seasons of the fourteen largest non-profit theatre companies. Does not include shows which opened on Broadway prior to this period but may still be running or Commercial Off Broadway shows. Special Note: Ethnic classification was not self-identified though significant effort was made to research interviews and bios which might indicate ethnic self-identification. Asian American actors include those of East Asian, South Asian (India and Pakistan) and South East Asian origin.

These stats were culled by a group of Asian American actors in NYC who recently formed an ad hoc committee to raise awareness about the systemic biases (both conscious and unconscious) within the casting process.

Here is their FB Page:

Posted by Guerrilla Girls On Tour at 12:25 PM 2 comments: