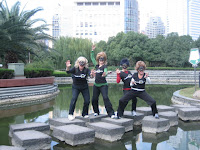 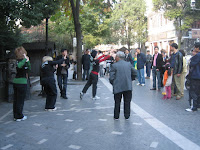 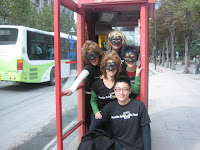 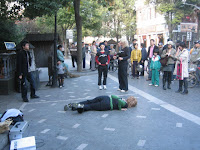 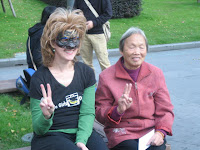 We performed our street theatre version of “Silence Is Violence” 7 times around Shanghai yesterday and distributed over 500 postcards containing resources for women and domestic violence. It was exhausting, exhilarating and inspiring. Our performance locations were several parks, a shopping mall and a city street near several galleries. The people of China were all intrigued by our performances and by the end of each showing of our 10 minute piece a crowd had gathered around us. While three of us performed one distributed the post card and most people were eager to take the materials we were handing out. A large amount of press arrived for our first performance and there was great interest from the media. In the end, Coco, Edith and Eva all agreed that it was a unique experience and humbling day for us. Thanks to Hu Yun and the team who accompanied us around the city from Zendai Moma. Here are some photos of our day. 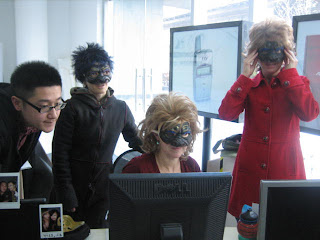 Check out Zendaiart.com for details of our street theatre piece "Silence Is Violence" on Friday, November 14th in Shanghai

- Aphra Behn
www.ggontour.com
Posted by Guerrilla Girls On Tour at 3:26 AM No comments:

Email ThisBlogThis!Share to TwitterShare to FacebookShare to Pinterest
Labels: Shanghai, Silence Is Violence

After getting up at 3AM to catch a 6AM flight to Atlanta, Eva, Edith and I were looking pretty sleepy when we met Coco Chanel at the Atlanta airport. She, of course, looked fabulous, tan and has taken on a bit of a southern twang now that she lives in the south.. We boarded our 11am flight to Shanghai and 17 hours later looked even worse than when we started. Our new Shanghai friend, Jocelyn, arranged for us to be picked up by a courteous and totally non English speaking driver and 30 minutes later we were in our hotel in the Pudong district…kind of like what Tribeca was years ago except it has tons of strip malls on every corner…so I guess it’s more like LA was years ago. Our host, Hu Yun meets us in the lobby and gives us our room keys and Eva immediately drops on her bed falling fast asleep. Edith, Coco and I want to take a walk around and end up in the largest supermarket I’ve ever seen where we gaze at the cute packaging on the juices and green iced tea bottles, drawing curious looks from the locals. We head into a well lit restaurant with an English menu and feast on bok choy, fried noodles and wonton soup with prawn dumplings….delicious. Oh and a couple of Xhing Tao’s to wash it all down. Then off to sweet dreams of the days ahead and our street performance piece “Silence Is Violence”. Thank goddess for Ambien.

Now that the election is over we can get back to more important issues like sexism in the New York City theatre scene. I recently saw “Boy’s Life” by Howard Korder at Second Stage. This was a play about three men, well boy’s I guess, who were liars, adulterers and date rapists. The silver haired audience yuked it up behind me while I sat stunned in the third row. Question: What does a play where a guy admits to having sex with his date after she passed out do? Answer: It makes us sick. Now that’s definitely not why I attend the theatre. Last night saw “All My Sons”, the sold out smash hit on Broadway that boasts a completely fresh eye from director Simon McBurney. It was over acted, melodramatic and was basically a play about a sound design. I won’t even go into what I thought about the revival of “The Seagull” except to say it was a big snoozorama. In short, my take on the fall season is that we desperately need a dose of “other” voices both writers and directors on the NY city stage. I hope that some good will come of the big pow wow last month at New Dramatists where the lack of parity for female playwrights was the point of discussion with notable local artistic directors. As I toss my Playbills in the trash this morning I chant my mantra: More Broads on Broadway.
-Aphra Behn
www.ggontour.com
© 2008

PS Off to China tomorrow…stay tuned for photos and reports from the front!
Posted by Guerrilla Girls On Tour at 1:51 PM No comments: